Louisiana Tech’s Debate Team is ranked 11th in the nation, and Tech’s Novice Squad is second nationally. Coached by School of Communication instructor Megan Smith, the team will work to improve on those lofty numbers in its three tournaments this month before nationals, to be held at the end of March at Tennessee Tech University in Cookeville. 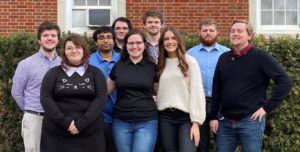 The team recently competed in the state tournament and has competed in multiple tournaments during the first part of the season. Here are some results from those competitions.

Katie McKenzie, a biomedical engineering major, was first place for Louisiana in Impromptu Speaking, and a double-octofinalist in Varsity Debate.

Political science major Skylar Dean placed second for Louisiana in Persuasive Speaking, which qualified her for the Interstate Oratorical Society National Championship. She was also an octofinalist in Novice Debate.

McKenzie and political science major Steve Garcia were quarterfinalist in Team Debate at the University of Southern Mississippi Tournament. Giacona made it to finals in Persuasive Speaking at that tournament.

At the Bossier Parish Community College competition, Timothy Winiarski and Kitchens were octafinalists in Junior Varsity Debate, and Kruskie was an octafinalist in Novice Debate.