Bradford-Robinson reminds graduates of the importance of unity

In her address to Louisiana Tech University’s Fall 2020 graduates, Bertha Bradford-Robinson advocated for unity despite the differences between people. The commencement speaker addressed graduates in the colleges of Business and Engineering and Science Friday night and in the colleges of Applied and Natural Sciences, Education, and Liberal Arts this morning.

Bradford-Robinson was the first female African-American student to enroll at Louisiana Tech in 1965. She graduated in 1976 with her bachelor’s degree in Early Childhood Education and has received an honorary doctorate from Tech.

During her address, Bradford-Robinson noted the similarities between her freshman year at Tech with its overwhelming uncertainties and the experience for students now.

“Like you, I feared the unknown,” Bradford-Robinson said. “Like you, I didn’t know what to expect. Like many of you, I wondered if I would like this place. We have all these things in common, right? What was different about your first day and my first day on campus?”

Bradford-Robinson went on to describe the hardships she and James Earl Potts, the first African-American student to enroll at Tech, encountered when they came to Ruston.

“I wasn’t welcomed by those passing me on the campus,” she said. “It was different because students didn’t look like James Earl and me. We endured many trials and tribulations as students.

Bradford-Robinson went on to note that the experience helped define her approach to life and surmounting challenges.

“We used the valuable lessons we learned and applied them to daily living,” she added. “I just believed that something good comes from bad situations and circumstances. The same holds true today. When life throws you a curve ball, you make the necessary adjustments and swing in an effort to knock it out of the park. 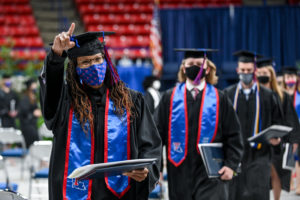 “2020 has taught us about making adjustments. 1965 was historical for me, and 2020 is historical for you as a class. Your class won’t be defined by what you’ve lost to this pandemic, but how you’ve responded to it.”

In closing her address, Bradford-Robinson asked the graduates to join her in making a difference with unity.

“The world is better when we stand together and face evilness and wickedness,” Bradford-Robinson concluded. “We drive out darkness and allow light to come in. Join me in spreading unity. Illuminate the world with love. Shine bright with love!”

At the end of the fall quarter, 338 graduates received degrees. They join the more than 107,000 Louisiana Tech alumni around the world. Graduates had the option of not participating in commencement exercises, which required masks and physical distancing and limited the number of guests to six per graduate.

Louisiana Tech will honor its Spring and Summer graduates with celebrations held on Sunday. Occupancy for each of the weekend’s events is within state-mandated gathering limits, and attendees are required to wear masks or face coverings to the ceremonies.