David Wolske, an award-winning designer, typographer and artist, and A.W. Thompson, the director of the School of Communications at Grand Valley State University in Michigan, will share their works with the Louisiana Tech community in the coming weeks. 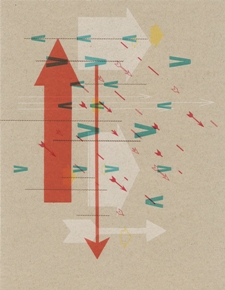 Both artists will have exhibits from Tuesday, Sept. 21 to Saturday, Oct. 9 in Tech’s School of Art galleries. Wolske will give an artist lecture at 4 p.m. on the opening date in the galleries, which will be followed by a reception at 5 p.m. His exhibit, “Subverting Vernacular,” will be displayed in the Bellocq Gallery, and A.W. Thompson’s “Incendiary Iconography: the legacy of the Cold War in America” will be available for viewing in the Main Gallery. Wolske is the creative director for the Book Arts Program and Red Butte Press at the J. Willard Marriott Library at the University of Utah. David has taught design, typography and letterpress printing at Indiana University, Herron School of Art and Design; Columbia College Chicago’s Center for Book and Paper Arts; Hamilton Wood Type and Printing Museum, and the University of Utah. “Letterforms are the building blocks of language,” Wolske has said about his exhibit. “My goal is to expand the vocabulary of these most basic communicative units and illuminate their expressive potential. By employing moveable type and letterpress printing, I revive and repurpose the materials and techniques of a once thriving commercial industry to investigate the co-evolution of language and communication technologies.” Thompson is an associate professor of photography at Grand Valley State University in Michigan. He holds a B.S. in physics from the University of Dallas and an M.F.A. in photography from Washington University in Saint Louis. His artwork is often about the meanings we attribute to, or derive from, our experiences of place and/or technology, and the relationship of art and science as ways of knowing. Thompson received inspiration for his exhibit from an 18-day raid that took place more than 20 years ago. 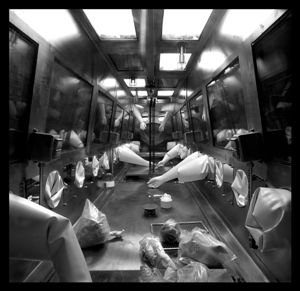 “In 1989 federal agents of the FBI and EPA conducted an unprecedented 18-day raid on the Rocky Flats Nuclear Weapons Plant outside Denver after numerous allegations of environmental abuses and concerns about worker health and safety,” Thompson said in a press release. “The findings of the Federal Grand Jury were never released, despite protests from participants in the raid and Grand Jury members themselves. “When the Clinton administration decided to tear down the secret weapons facility near my childhood home, I knew I needed to photograph what had been inaccessible to the eye of most citizens and what would soon disappear. I attempted to imbue the facts with feeling in a place that was conceptually horrifying, industrially banal, and environmentally devastating, in hope of convincing my fellow citizens that this place, and the places across the western U.S. where its toxic remains went, were not worth the costs to health, environment, treasury, and potentially, to humanity, that is the true legacy of the Cold War.  “The Rocky Flats landscape where the plant once stood, though still fenced off, is now technically a wildlife refuge, a status chosen because it afforded the lowest standard of environmental cleanup. Former plant employees continue to fight for compensation for the ongoing damage to their health, and controversy over the quality of the cleanup continues to surround the site. This is a story about the Cold War era, the corporate military industrial complex and our national culture.” The Louisiana Tech University School of Art galleries are located in the Visual Arts Center between Tech Drive and Mayfield Street, next to the Natatorium and across from A.E. Phillips School. The galleries are open weekdays from 9 a.m. to 4 p.m. and admission is free.  For more information call the School of Art at 318-257-3909.