Two Louisiana Tech junior journalism majors were awarded scholarships from the Shreveport Journalism Foundation at the group’s annual board meeting and banquet. 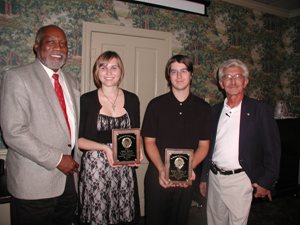 Kelly Belton, of Simonton, Texas, and Robert Wilson, of Boyce, were chosen to receive the Kerry Garland Memorial Scholarship and Orland Dodson Memorial Scholarship, respectively. Belton serves as news editor on Tech’s student newspaper, The Tech Talk, and Wilson serves as associate managing editor. “From time to time through the years, we would have one recipient of a scholarship from this foundation, but we have two this year,” said Dr. Reginald Owens, journalism department chair. “It is an honor and I congratulate our students for holding up the Tech banner.” The awards come with $1,000, an individual plaque and a trophy plaque listing all the recipients that rotates among the schools of that year’s winning students. “We’re so proud that both plaques will hang on our wall this year,” Owens said. No awards were given in 2009. A Tech student was the last recipient of the Garland scholarship in 2008. The first recipient of the Kerry Garland Scholarship was awarded in 1987, and Tech students have claimed 10 of the 20 awards since that time. Sonja Bailes, a Tech journalism alumna, was the first recipient of the Orland Dodson Scholarship in 1991, and out of the 15 scholarships awarded, Tech students have received five of them.