Louisiana Tech journalism students and the student-run newspaper, The Tech Talk, received top-tier rankings and a multitude of awards this past weekend at the Southeast Journalism Conference at Troy University in Alabama. In addition to receiving one of the top honors for Student Journalist of the Year and many first and second place recognitions, Louisiana Tech also received three other top honors. In the Best of the South competition, where 33 schools competed, The Tech Talk received third place in Best Newspaper, and the paper’s website received 10th place. Also, Tech came in fourth in the on-site championship. 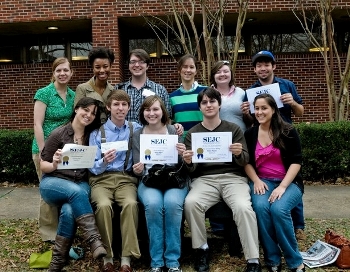 “We are proud to have scored in the top tier in the Best of the South overall competition, the Best of the South college newspaper contest and the on-site championship,” said Dr. Reginald Owens, chair of the journalism department. “In the overall Best of the South, we’re in the Top 10 in eight of the categories entered.” The Best of the South competition, in most of the categories, recognizes the Top 10 student journalists from the Southeast. Owens said Tech competed well against top schools in the South in both the on-site and Best of the South competitions. “The big-name journalism schools and programs? In terms of journalism skills, we’re right there with them,” he said. “We competed against the best schools in an eight-state region of the South and we won. We came out in the top tier of schools. We’re in good company. This tells me something that we already know — we are among the top journalism programs in the South — actually the nation. This is a small program that does well.” In the Best of the South competition, where school publications and students submit work for judging prior to the conference, the following students received awards: * Amy Olita of Shreveport — first place, graphic design; second place, newspaper design * Amber Guyotte of Jonesboro — second place, special events reporting * Danielle Cintron of La Place — third place, feature writing * Lance Traweek of Monroe — third place, Student Journalist of the Year; eighth place, opinion-editorial writing; * Kelly Belton of Simonton, Texas — fifth place, news writing * Robert Wilson of Boyce — seventh place, arts and entertainment writing In the on-site competition, which was held at the conference under deadlines, the following students received awards: * Ben Corda of DeRidder, first place, photography * Kelly Belton second place, media law * Robert Wilson second place, entertainment writing. “The students did this,” Owens said. “This is their reward for their hard work. I am proud of the work our students do. This year’s competition tells me that we compete well against the best.” The Southeast Journalism Conference is open to the organization’s member schools from eight states – Alabama, Arkansas, Florida, Georgia, Louisiana, Mississippi, North Carolina, and Tennessee. This year’s competition included 331 entries from 33 eligible member schools. Judges for the Best of the South competition included 20 journalism professionals from newspapers, broadcast outlets and magazines from across the country.