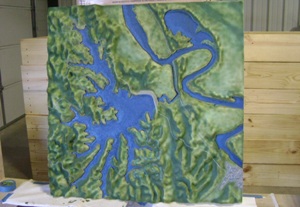 Funded through a $5,000 gift to the School of Architecture, a team of fourth-year students was tasked with creating a three-dimensional representation of the reservoir and surrounding area that will be unveiled at an April 15 ceremony at the Schepis Museum in Columbia, La. According to Troy Malmstrom, assistant professor of architecture and director of digital fabrication and rapid prototyping at Louisiana Tech, the students used an existing topographic drawing to produce a 3-D computer model of the region.  They then used the School’s Computer Numerical Controlled (CNC) equipment to mill the physical model out of foam.  The model was then painted by Stephanie Carwile, chair of the interior design department at Louisiana Tech. Project engineers say that the lake will cover approximately 1000 acres and produce nearly seven million gallons of water per day for the local community.  They expect that the model created by the Louisiana Tech architecture students will be available to the public for viewing and will be used to assist in master planning of the land surrounding the lake. Once the lake is officially opened, the model will be housed at a public facility around the lake for future viewing.