An article by Guy Carwile, professor of architecture at Louisiana Tech University, on the history of the Jack Tar Hotel in Galveston, Texas and its innovative and progressive “poolscape” concept is featured on the cover of the spring 2011 edition of Society for Commercial Archeology (SCA) Journal. Carwile’s article highlights the Jack Tar’s beginnings as a humble pre-World War II tourist court through its transformation into an exemplary mid-century motor hotel.  Its signature element and centerpiece was the swimming pool and pool terrace that was arguably one of the finest hydro-centric assemblage ever built for transient use. 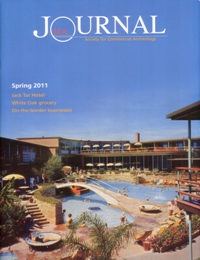 “The Jack Tar poolscape is unique because it is if fact an Edenic landscape,” said Carwile.  “The elements and features that contributed significantly to this distinctive landscape include the shear freeform size of the pool, the inclusion of multi-level terraces surrounding the pool, ample planters for vegetation, and the presence of a bridge that delaminates from, and therefore remains connected to, the surrounding terrace surfaces.” Calwile says the poolscape at the Jack Tar was significant in that it was among the first post-war examples where the entire courtyard area surrounded by motel rooms was designed in an integrated way to create a “synthetic paradise.”  This project helped play a role in establishing the agenda for some of the larger-than-life resort architectural projects seen today. “Hopefully, the article will help inform Louisiana Tech architecture students that all built environments are shaped by a number of social, cultural and economic factors as well as multiple individuals, and that significant buildings are not typically the product of the singular creative voice of the architect or designer,” said Carwile. Carwile earned his master’s degree in architecture from Rice University and a bachelor’s degree in architecture from Louisiana State University.  He has served on the Louisiana Tech faculty since 1994.  In addition to his membership in the SCA, he is also a member of the National Trust for Historic Preservation. According to its mission, the SCA seeks to recognize the unique historical significance of the 20th-century commercially-built environment and cultural landscapes of North America.  They work to carry out projects of documentation, education, advocacy and conservation to encourage public awareness and understanding of these significant elements of our heritage. Specifically, the SCA’s interests focus on the preservation of various historic architectural elements including highways, restaurants, motels and lodging, retail centers, and theatres.