Put together motivated high school students with equally motivated college students at a weeklong educational camp, and the sky’s the limit. Louisiana Tech has taken the lead in the state in offering a variety of different camps for La Gear Up, which has been operating since 2003 and offers camps for aviation, film, sports medicine, atmospheric science and engineering, all on campus. Dr. Glenn Beer, an assistant professor of education at Tech and director of the La Gear Up Statewide Management program that oversees all camps in the state, said the idea is to encourage campers to attend college by introducing them to different departments on campus and different career options through an interactive experience. “We want to give these kids an opportunity to live on campus, experience campus life and get connected to a counselor so that they have a friend who is a college student,” Beer said. He said La Gear Up is unlike other camps because they do not spotlight students with academic potential but they try to expose as many students as they can, regardless of where the students currently are academically. “We start working with them when they’re in sixth or seventh grade and we follow them until they graduate,” Beer said. “Their first camp experience many times is their first time out of their district or hometown. It really exposes them to something outside of where they are.” The film camp, which was conducted in June, took place in the journalism department’s newsroom laboratory. The camp, titled “Lights, Camera, Action!,” was directed by Dr. Reginald Owens, journalism department head. Journalism students and the entire journalism faculty and staff served as teachers and mentors for the 57 high school students participating in the program. 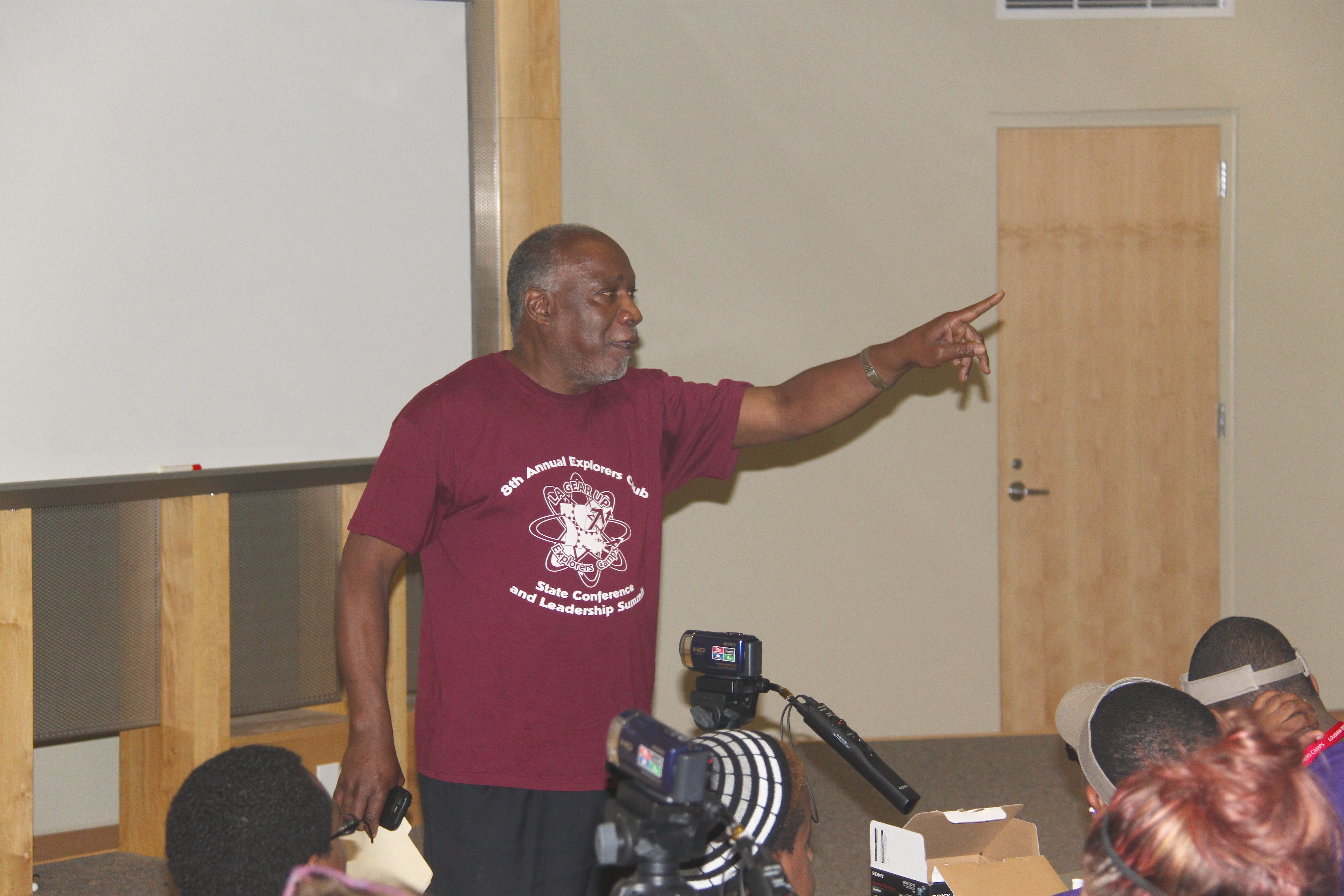 Dr. Reginald Owens teaches students how to tell a story through film.

“Our whole department was a beehive of activity that week,” Owens said. “We had high school students and computers in almost every corner of the department. It was really heartwarming to see the excitement of these youngsters going out reporting, and then video taping and editing their stories. We all got a lot of joy out of seeing these high school students discovering their creativity. Through this camp, many said they have now discovered their passion.” Beer said in order to be eligible for the camp, the students’ school must have a minimum of 50 percent of the students at or below the national poverty level as well as being in a district that have ACT scores lower than the state average. “The most empirically based study that we have done showed that students who participate in the La Gear Up camps did better than students who did not participate in the camps,” Beer said. “There is a difference of 0.5 in their GPA, so we think that there is an impact.” Marguerite Hoke, a junior studio art major and La Gear Up counselor, said she wants to give campers the confidence that they lack because most of them have been raised to believe that they are not capable of reaching their goals. “We want to promote going to a four-year college because often times they don’t get that encouragement from home,” Hoke said. “A role of a counselor is to get them thinking about their goals and help them map out how they can accomplish that as well as getting them thinking about what they can do now to be prepared for their future.” Beer said that the college students are the key to having a good camp as compared to a not so good camp. 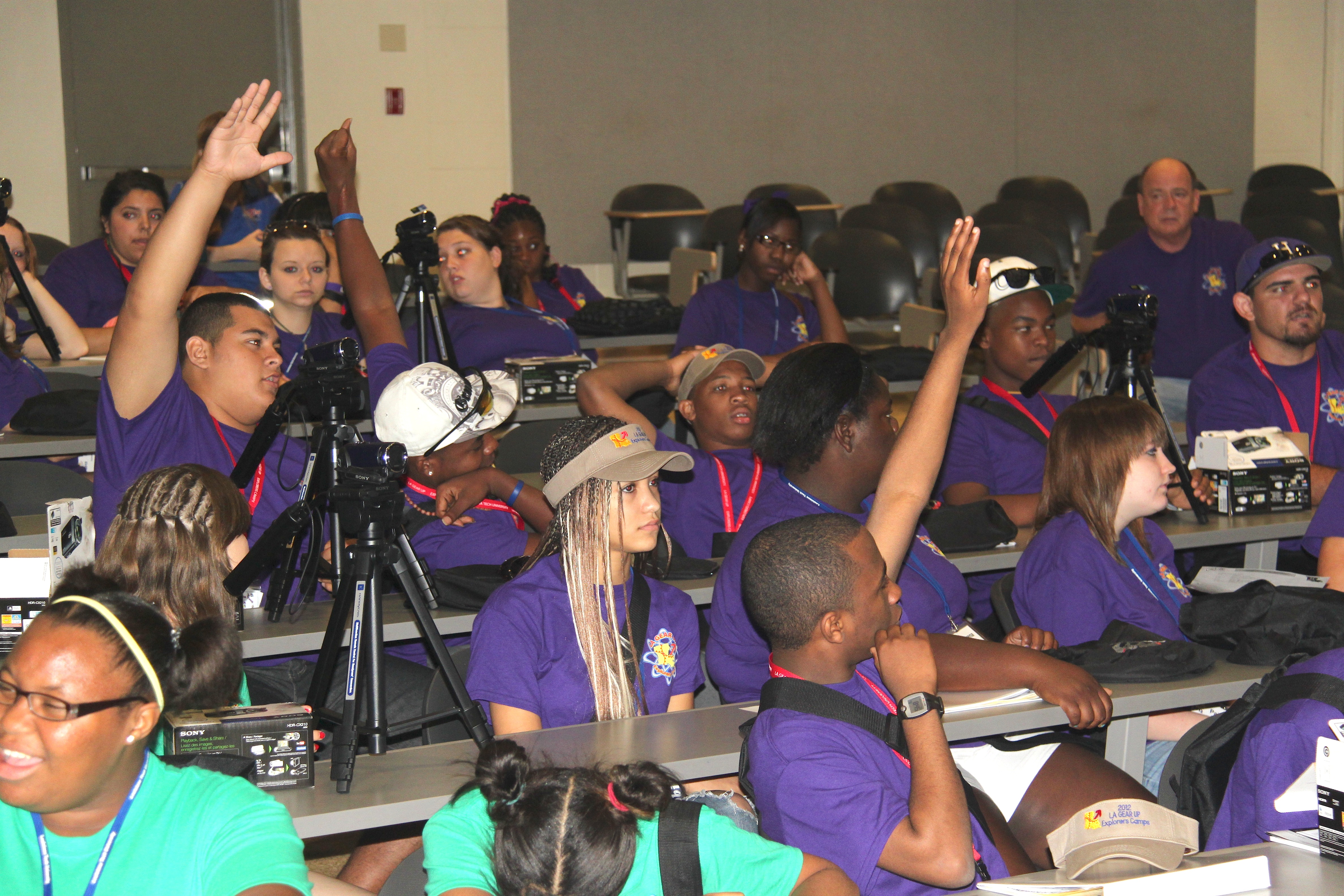 Students from across the state learn how to edit film through journalistic skills at one of the La Gear Up camps hosted at Tech.

“It is a challenging position to be a counselor, because they are there with those kids 24/7,” he said. “They are really disciplinarian, medic, counselor and friend.” Khalil Roy, a junior at Bunkie High School and La Gear Up camper, said he wanted to attend Northwestern University until taking part in his first La Gear Up camp at Tech in the seventh grade. “I knew that I wanted to go to college, but Gear Up really got me excited for it,” Roy said. “Being a part of Gear Up since the seventh grade has taught me the path to get to college and it also helped me to find my college of choice.” He added that La Gear Up has given him the extra push to get him to the point he is at in life now. “From offering me a free stay at camp to offering me amazing camp counselors that have helped get me on my path to college, together these things have helped me to get to this point in my life,” Roy said. “I would say without Gear Up, I would not be who I am.” Beer said his unconventional educational experience inspired him to create these camps. “As a result of a lot of factors, I didn’t get to go to college after high school,” he said. “I don’t want that to happen to our students; I want them to have all the information they need to make sure they are monitoring where they are in terms of graduation. It requires giving them information and then helping them to take responsibility for making sure they are doing what they need to do so that when they graduate they have the option to go to college if that’s what they want to do.” Blair Barton, a junior at Marksville High School, said that prior to La Gear Up, she did not believe she would be able afford a college education. “They emphasize that anyone can go to college, whatever your situation may be,” Barton said. “There’s a lot of different ways to get money for college, like scholarships and financial aid that I didn’t know about.” Beer said the most rewarding thing for him was the relationships he has established with the campers. “Through the first six-year cohort there have been many kids I have known since they were in the sixth grade that I now see on Tech’s campus as college students,” he said. “That’s what I do it for; when you see that outcome and the campers come full circle and want to come back and serve as counselors when they’re in college it all becomes a powerful experience for everyone involved.” Written by Zach Griffith