Louisiana Tech Choirs will be joining the Rhodes Singers for a joint choral concert Thursday, March 21 at 7:30 p.m in the Howard Center for Performing Arts. Admission is free and the public is invited to attend. 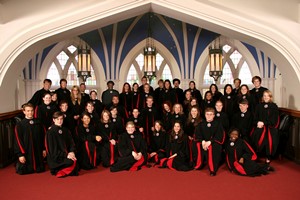 The Rhodes Singers is a nationally-noted undergraduate student choir from Rhodes College in Memphis, Tenn.  Directed by Dr. William Skoog, the Rhodes Singers was organized in 1937 and soon after started performing an annual national tour.  Every three years, they perform internationally. “Dr. Skoog was my college mentor in graduate school and we have been close friends for 10 years,” said Sean Teets, director of choral activities at Louisiana Tech.  “I am honored to have him come to campus and bring his group.” Tech choirs have performed under the direction of Skoogs before in Rome and Switzerland in 2008 and 2010.  In the joint concert, the Rhodes Singers and Tech choirs will each perform songs individually and will join together at the end to perform two songs. Teets said several of the songs performed will have a Civil War theme including a performance of “The Battle Hymn of the Republic.” by Lisa Plaisance