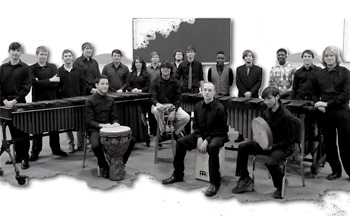 “One of the pieces I’m most excited about is Henry Cowell’s ‘Ostinato Pianissimo,’ written in 1934,” Lyons said. “It is one of the first historical instances of music scored exclusively for percussion. Another highlight for me will be John Cage and Lou Harrison’s composition, Double Music, written in 1941. This piece is a quartet in which the two composers worked independently of one another without knowing what the other composer would write.” Another favorite, Lyons’ said, was Susan K. Powell’s piece, which has been performed at Tech before. “I’m also looking forward to Susan Powell’s piece titled ‘Re: Disaster,’” Lyons said. “It’s a work we’ve performed once before a few years ago, and it was a big hit. About halfway through the performance, the players actually stage a ‘disaster’ in musical form.” The concert will at 7:30 p.m. in Howard Auditorium. Admission is free and open to the public. For more information, contact the School of the Performing Arts office at 318-257-2711 or email Lyons at glyons@latech.edu. Written by Judith Roberts – jroberts@latech.edu