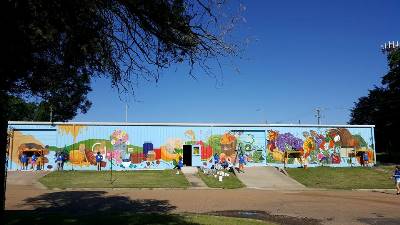 “The mural will be part of revitalization and beautification of the space,” said Nicholas Bustamante, chair of studio art, who teaches the class. “The project began in early March when students met with the Ruston Farmers Market to talk about design ideas.  It was important to showcase the items that would be available at the market.” Molly Butler, one of the students in the studio art class, said the experience had helped her and her fellow classmates learn about art in the community and about design issues that could arise with any project. “When we first started on the mural we ran into a few design issues, but we worked to correct it and the issue was resolved in just a day,” Butler said. “It helps to have a handful of talented classmates and professors alongside you working together to solve the issue.” Butler said the project was very rewarding. “There were a lot of satisfying aspects with working on this mural, but I think the most rewarding facets were definitely the appreciation we received from the community, being able to watch the progress quickly take place, and also having the privilege of telling others that we were a part of completing such an awesome piece of art for Ruston,” she said. Bustamante said students were given a week to create detailed colored sketches to   present to the client.  A design direction was then chosen and developed, and students started painting on the wall in the middle of March. “This course provides students with the real world experience of working with a client and gets them to engage with the community in a dynamic way,” Bustamante said. “The School of Design at Tech is committed to providing students with unique learning opportunities and finding ways to partner with the community.” Butler said one of the most rewarding parts of the class was how exciting it was to drive by the mural and know she and her fellow classmates participated in providing art for the community. “I am so thankful for our university and our professor, Nick Bustamante, for working so hard for the studio department at Louisiana Tech to provide us with courses such as this mural class,” she said. “I would have probably never had the experience of participating in painting a mural had it not been for him.  I never thought I would enjoy something like this, but he has opened doors for so many of us, and I am very thankful for that.” Written by Judith Roberts – jroberts@latech.edu