Genaro Kỳ Ly Smith, a Louisiana Tech University instructor of English, will read from his new novel, “The Land South of the Clouds,” at 6 p.m. Tuesday, November 1, in Room 105 of George T. Madison Hall on the Louisiana Tech campus. The new work, which will be released by University of Louisiana at Lafayette Press Oct. 25, will be available for purchase and signing after the reading which is free and open to the public. 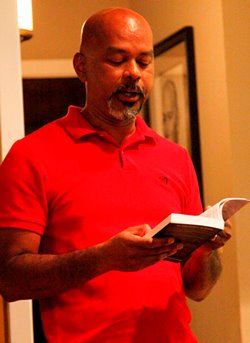 Genaro Smith reading from The Land of the Clouds.

According to Neil Connelly, author of “The Midlife Crisis of Commander Invincible,” “Buddy Cooper Finds a Way” and “St. Michael’s Scales,” Smith’s novel is a “part coming-of-age, part historical family drama, part love story, and all good.  Smith bravely tackles the tribulations of being biracial, the impact of a mother’s abandonment, and the far-reaching consequences of war.” The press describes the novel in its publicity:  It is the summer of 1979—the year of the film “Apocalypse Now,” long lines at the gas pumps and American hostages in Iran—and our 10-year-old narrator, Long-Vanh, is burdened with the secret his mother, Vu-An, entrusted him to keep: not to tell anyone of her desire to return to Vietnam to be with her father who is serving hard labor in a reeducation camp. As a con lai—half Vietnamese, half black—Long-Vanh struggles to see his place in “Asia Minor,” an enclave of Los Angeles comprised of veterans and their foreign war wives. He sees his inability to speak or read his mother’s native language, or even maneuver chopsticks properly, as flaws, and that if he can compensate for them, his mother will stay in America to keep the family intact. Eric Nguyen, diaCRITICS.org, said, “Genaro Kỳ Ly Smith skillfully balances the philosophical and the surreal in a powerful novel that explores identity in post-Vietnam War America. His unforgettable cast of characters ache with life and humanity as they struggle to find a place where they belong and the love that they deserve.” “The Land South of the Clouds” serves as the companion piece to “The Land Baron’s Sun: The Story of Ly Loĉ and His Seven Wives,” Smith’s first book of poetry, also published by ULL Press. Smith was born in Nha Trang, Vietnam. He earned an M.A. and M.F.A. in creative writing from McNeese State University in Lake Charles. He has numerous works of poetry and fiction published in a number of journals and magazines. Smith has taught composition, literature and creative writing at Louisiana Tech University since 1999. Written by Judith Roberts – jroberts@latech.edu