Louisiana Tech University’s Waggonner Center for Civic Engagement and Public Policy will host a public debate titled, “Consumer of Citizen: How Do YOU Choose When You Vote?,” at 10:00 a.m. March 26 in the Howard Center for the Performing Arts on the Louisiana Tech campus. Dr. James R. Stoner, Jr., professor of political science at Louisiana State University, will join Dr. Michael Munger, professor of political science at Duke University, to debate issues such as, “Does democracy depend on individuals acting as citizens rather than as consumers?” and “Are the choices made in a voting booth fundamentally different from those made in a supermarket?” 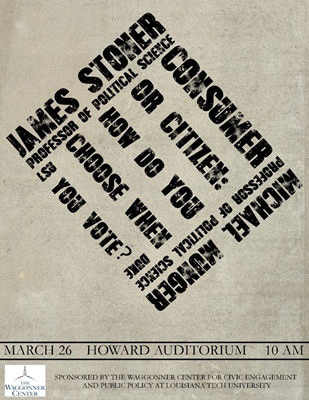 “The importance of events like this, and of the Waggonner Center more generally, really cannot be stressed enough,” said Dr. Jeremy Mhire, associate professor of political science at Louisiana Tech and event organizer. “All too often, we lose sight of the real purpose of public education – to educate students regarding their rights and duties as citizens of the republic. “With events such as this debate, the Waggonner Center helps us to keep the ‘public’ in public education, and therefore to engage again questions of perennial relevance. Perhaps if we are lucky, we may also succeed in reestablishing the possibility of genuinely civil public discourse.” Stoner, who earned his Ph. D. from Harvard University in 1987, has taught at LSU since 1988 and chaired the Department of Political Science from 2007 to 2013. He also served as acting dean of the Honors College in fall 2010. Stoner is the author of “Common-Law Liberty: Rethinking American Constitutionalism” and “Common Law and Liberal Theory: Coke, Hobbes, and the Origins of American Constitutionalism” as well as a number of articles and essays. Munger is the director of the interdisciplinary PPE Program at Duke and served as chair of the Department of Political Science from 2000 to 2010. At Duke, he has won the Howard Johnson Award, an NAACP “Image” Award for teaching about race, and admission to the Bass Society of Teaching Fellows. Munger earned his Ph.D. in economics from Washington University in St. Louis in 1984 and began his teaching career in the economics department at Dartmouth College, followed by appointments in the political science departments at the University of Texas at Austin, and the University of North Carolina at Chapel Hill. Fostering citizenship, bipartisan understanding, effective public policy and civic leadership among students, and engaging the public at large is at the core of the Waggonner Center’s mission. The Center, named for U.S. Representative U.S. Representative Joseph D. Waggonner who represented the Fourth Congressional District of northwest Louisiana from 1961 until1979, focuses on restoring the principles and values of bipartisanship – a hallmark of Rep. Waggonner’s career – by educating and inspiring students to employ a critical, bipartisan approach as they become more engaged in the political issues and problems of our democracy. Mhire says the Waggonner Center also seeks to foster and promote active and responsible civic engagement through an interdisciplinary combination of innovative curricular initiatives, academic outreach, and community outreach. “By working across traditional academic disciplines, the Waggonner Center aims to create an unprecedented academic experience that engages faculty, students, and community stakeholders alike,” Mhire said.