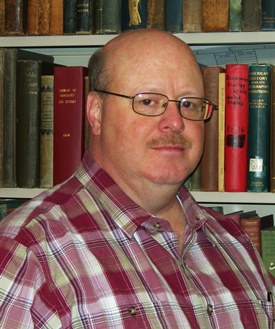 The CLAG Outstanding Service Award, a highly-prestigious honor which has only been awarded five times since 1970, is given to a member of the association who has earned distinction and performed major service to the organization over a period of years.  CLAG is the premier national organization of geography professionals specializing in the study of Latin America. Mack received the honor during a public event at the organization’s general conference held in New Orleans earlier this month. Among Mack’s many services to the organization cited by the CLAG selection committee was membership on the CLAG Board of Directors from 2003 to 2015, including terms as vice-chair and chair.  He also served for almost 10 years as editor of the CLAG newsletter, during which time he achieved conversion of the publication to a new format for digital distribution. Committees Mack has served on include juries for graduate student paper competitions, travel awards and summer field work awards.  He has also conducted professional field trips to Guatemala for academic geographers in Chichicastenango and Guatemala City, and has chaired the organizing effort for the CLAG general conference held in Granada, Nicaragua in January 2009. A member of the Louisiana Tech faculty since 2006, Mack holds a bachelor’s and master’s degree in geography from the University of Kansas, and Ph.D. from Louisiana State University.  He is a specialist in historical geography and his research interests include port cities and transportation systems in general, with an emphasis on Central America. Mack’s current projects focus on interoceanic transit projects in Honduras and Nicaragua and agricultural change in north Louisiana since 1950. At Louisiana Tech, Mack teaches a wide variety of geography courses and he also serves as a member of the Honors Program faculty. Written by Judith Roberts – jroberts@latech.edu