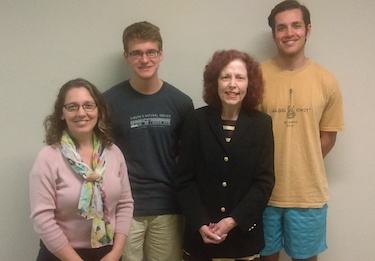 King is both a French and a Spanish double major. His career plans are to teach at the university level after receiving his Ph.D. or to be a researcher in the area of international public health. Peter Leboeuf has received a CODOFIL scholarship to attend the total immersion language program at the Collège de Jonquière located in Saguenay, Canada, in the summer of 2017. Leboeuf is both a French and an engineering dual degree student. Leboeuf plans to use his French skills in a future position such as with the European Organization for Nuclear Research in Geneva, Switzerland. Dori St. Amant and Dolliann Hurtig, French faculty in the School of Literature and Language, said they are pleased at the success of these two young men whom they teach. Hurtig said, “These talented students will be worthy ambassadors from the state of Louisiana and will represent Louisiana Tech University with pride and honor.” Written by Judith Roberts – jroberts@latech.edu