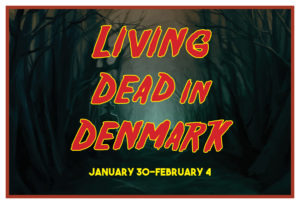 What would you do to reclaim your lost love? “Living Dead in Denmark” has some dead-solid answers. The second production of the 2017-18 season from Louisiana Tech’s Department of Theatre, this Mark Guinn-directed show is one in which the dead walk, swords swing, Shakespearean heroines unite to fight, and the fate of humanity hangs in the hands of a few undead titans willing to face a zombie army. Performances for “Living Dead in Denmark” will be at 7:30 p.m. Jan. 30-Feb 3 and at 2 p.m. Feb 4 in the Arthur W. Stone Theatre in Tech’s Howard Center for the Performing Arts 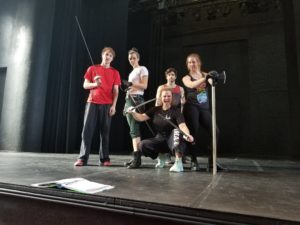 The cast of “Living Dead in Denmark” (left to right) — Collin Cagle, Lyndsay Manson, David Miller, Samantha Lancaster, and (crouching) Olivia Willcox — will bring to life the second production of the 2017-18 season from Louisiana Tech’s Department of Theatre.

Tickets will be $25 for general admission and $20 for seniors (60+) and children under 14. Student tickets will be $15. Purchase online at LATechUniversityTheatre.com or by calling 318.257.2930 or by visiting the box office inside the Stone Theatre lobby, open weekdays from 1:30-4:45 p.m. To discover more about Tech’s Department of Theatre, visit facebook.com/LATechTheatre and follow @LATechTheatre on Twitter and Instagram.