A U.S. ambassador-at-large and Ruston native will speak at Louisiana Tech Thursday about his work prosecuting international war criminals, especially those involved in the wars in the Balkans during the Presidency of Bill Clinton. Ambassador Clint Williamson will talk about work as a member of the U.S. delegation to the United Nations as part of the university’s homecoming activities. 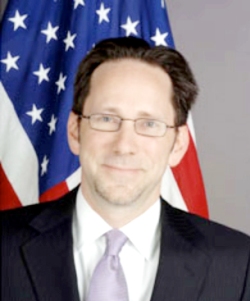 The event is sponsored by the College of Liberal Arts and will be held at 2 p.m. in George T. Madison Lecture Hall, room 105. Williamson is also being honored this week as the College of Liberal Arts 2010 Alumnus of  the Year. Williamson earned his undergraduate degree at Tech in 1983 and later attended Law School at Tulane University. “We are honored to have Ambassador Williamson as our alumnus of the year,” said Ed Jacobs, dean of the College of Liberal Arts. “Ambassador Williamson’s remarkable and stunning career as a war crimes prosecutor  and work at the United Nations models the success that our Liberal Arts graduates are capable of obtaining.” Immediately prior to his confirmation in 2006 by the U.S. Senate, he was special assistant to the president and senior director for relief, stabilization and development at the National Security Council. From 2003 to early 2006, he served as the director for Stability Operations on the NSC staff.  While at the NSC, he was instrumental in developing the proposal for creation of a standing U.S. government post-conflict response capability, which was realized with the establishment of the Office of the Coordinator in the State Department in 2004. Early in his tenure at the NSC, Williamson served as the first senior adviser to the Iraqi Ministry of Justice in Baghdad from April to July 2003. He has held positions as director of the Department of Justice in the U.N. mission in Kosovo, trial attorney at the International Criminal Tribunal for Yugoslavia in The Hague, Netherlands where he supervised investigations and field operations in the Balkans, compiled indictments and prosecuted cases at trial. Among the cases handled by Williamson were those against Milosevic Slobodan, the late president of Yugoslavia who was charged by ICTY with crimes against humanity. Prior to his work with the international tribunal, Williamson served as a trial attorney in the U.S. Department of Justice organized crime section and as an assistant district attorney in New Orleans. Written by Dr. Reginald Owens – regowens@latech.edu