Book it: Tech’s ‘Fletcher Smith Collection’ gets another literary boost 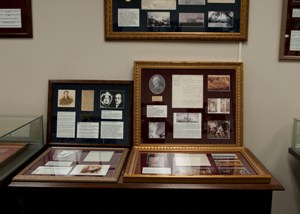 Kardatzke and her husband Jon, of Wichita, Ks., founders of that city’s popular Museum of World Treasures, have expanded the Frellsen Fletcher Smith Memorial Collection at Tech’s Prescott Memorial Library.  On loan from the Kardatzkes, the collection of noteworthy literary documents is named after Lorna’s father, Frellsen Smith, the university’s first technical writing professor. Presented by the couple to special collections librarian and archivist Peggy Carter, Thursday’s additions to the two-year-old collection include 1st editions of Byron’s “Child Harold’s Pilgrimage, Canto 3,” a Louisa May Alcott letter, a 1st edition Thackeray, documents by Charles and Mary Lamb, and a Thoreau signature. “Thanks to Lorna and Jon, Louisiana Tech probably already has the finest collection of literary artifacts in the South,” said Rick Simmons, George K. Anding Endowed Professor of English and the Director of Tech’s Honors Program. “Their donations cover a broad range of literary figures, and while some of the contributions, such as some of the letters and the signatures, are interesting simply because they were penned by the authors, other pieces are extremely important.” 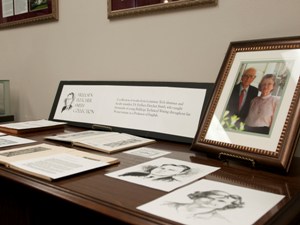 According to the Wordsworth Trust, the collection’s copy of William Wordsworth’s poem “November 1813” is a draft of the poem not known to exist anywhere else in the world. It appears that the handwritten copy of Robert Southey’s “Imitation from the Persian” is the original version of the poem he wrote at Lowther Castle in 1828. “Just the documents we have in the collection that are in my area of specialty,  19th century British literature – documents by Dickens, Wordsworth, Southey, Ruskin, Tennyson, Thackeray and Ainsworth — certainly rank this is as one of the best collections from that period that I know of outside of the British Museum.” Simmons said. The collection, which also includes documents by American greats Twain and Sandburg, is available for viewing in Prescott’s archives/special collections wing. Written by Teddy Allen – teddy@latech.edu