Louisiana Tech’s School of Art has received a scholastic gift from a retired Tech professor and supporter of the university. 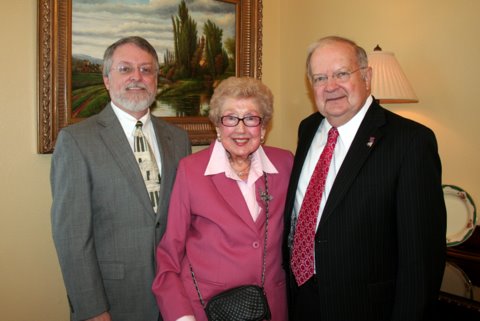 Dr. Reba K. Neel created the Lenora McDonald Neel and Oliver Fulton Neel School of Art Endowed Scholarship. The $100,000 scholarship is in memory of Neel’s parents and is to help art undergraduate students with their college expenses. Jonathan Donehoo, director of the School of Art, said he is very pleased to be able to offer additional scholarships to their art majors. He said Neel has been a strong supporter of the arts and the Ruston community at large. After working in industry for ten years, Neel began teaching at the collegiate level with positions at Lee College (Baytown, Texas), Texas Women’s University (Denton, Texas), Indiana University (Bloomington, Indiana), and Louisiana Tech.  She served as department chair for Office Administration in Tech’s College of Administration and Business from 1965 until her retirement in 1986. Nell’s art education included courses in design, color theory, drawing, art history and oil painting from some of Tech’s most accomplished faculty.  She has held solo shows in Ruston, Shreveport, and Bossier City, earning awards in both juried and non-juried competitions.  Neel’s works are included in many private and corporate collections in the U.S., Mexico and Canada. Relocating from Ruston to Shreveport in 2003, Nell became involved with a number of art organizations and continued to participate in workshops in several mediums.  During that time, she held three solo shows as well as exhibiting in a number of group shows. Neel has a bachelor’s degree in Commerce from Northwestern State University in Natchitoches, an MBA in Personnel Management from University of Texas-Austin, and a Ph.D. in Business Education from Indiana University.  She currently makes her home at The Oakes of Louisiana in Shreveport.