A state-of-the-art technical writing lab was dedicated Sept. 13 honoring a former associate dean who also served Louisiana Tech’s English department for more than 30 years. The Dennis E. Minor Technical Writing Lab will be used by classes in technical writing and presentation classes. Minor served as associate dean of the College of Liberal Arts from 1998 until his retirement in 2005. He died in 2006. Located in Room 209 of George T. Madison Hall, the lab has 25 computers and ergonomic workstations equipped with the latest software including digital multimedia smart classroom instructional technology. 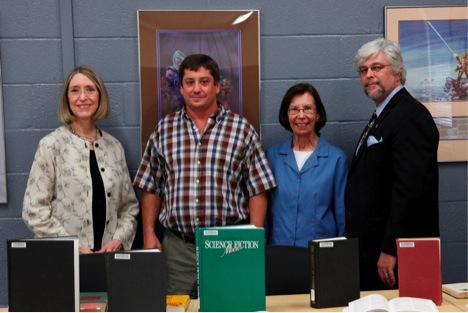 “He was a great friend of mine with a wry sense of humor and keen insight into the follies and foibles of human nature,” said Dr. Donald P. Kaczvinsky, dean of the College of Liberal Arts. “I think he would have been thrilled to see the lab named after him, with its new furniture and state-of-the-art technology, and I feel the room will be a fit memorial to his many contributions to the university.” Dr. Terry M. McConathy, vice president for academic affairs, conducted the official dedication of the lab. Others on the program were Tech President Les Guice and Dr. Susan Roach, director of the School of Literature and Language. With a Ph.D. from Texas A & M University, Minor came to Tech in 1974 as an assistant professor of English and taught early American literature and technical writing. He was later named the George K. Anding Professor of English. He received the Faculty Senate Chair Award for1989-1990 and the Louisiana Tech University Foundation Professorship Award for 1994-1995. He published works in technical writing pedagogy, literary studies, and creative writing, including science fiction short stories. In 1996, Minor developed and taught the first course at Tech to be delivered completely online – a technical writing course. He continued developing the technical writing curriculum and created a course in science fiction. “He was a pioneer in the field of technical writing, both in terms of his scholarly work and his teaching,” Kaczvinsky said. “He was also ahead of his time in his knowledge of and interest in computers and classroom technology.” Kaczvinsky said Minor was a mentor to many faculty members across campus. “I consider Dr. Minor one of the truly great professors of the department of English, the College of Liberal Arts and Louisiana Tech University,” he said. “He was the person we would turn to for advice, something that carried over when he became the associate dean of liberal arts.” The lab was funded by a $53,7444 Board of Regents enhancement grant. Roach and David Merchant, an instructor of English, wrote the proposal for the grant. The lab also features artwork, which is part of a special collection based on the science fiction writings of L. Ron Hubbard. In attendance were Minor’s widow, Shirley and son, Brian; brother David; as well as other friends and family; and university faculty and staff.