Dr. Don Kaczvinsky, dean of Louisiana Tech University’s College of Liberal Arts and George E. Pankey Eminent Scholar in English, was an invited guest speaker at “Reading Graham Swift: International Conference,” hosted recently by the Department of British Literature and Culture for the Institute of English Studies at the University of Łódź in Łódź, Poland. 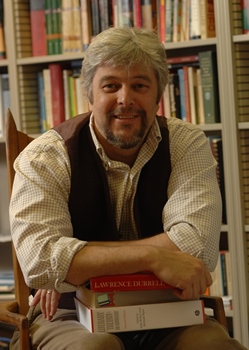 Kaczvinsky presented a paper titled, “Rejoycing Tomorrow: Graham Swift and Intertextuality” which considered the family resemblances between Swift’s novel, “Tomorrow” (2007), and the Penelope chapter in James Joyce’s “Ulysses.” Kaczvinsky further explored the notion of literary “paternity” and artistic originality through Swift’s metaphor of “artificial insemination” as presented in Tomorrow. The research was supported by the George E. Pankey Eminent Scholar Chair in English, which is made available through the State of Louisiana Board of Regents Support Funds. “I have been reading and teaching Joyce’s Ulysses for over 25 years and Graham Swift for about 15 years,” said Kaczvinsky. “When I read Swift’s Tomorrow, I realized the close connection between his novel and the ‘Penelope’ chapter of Ulysses. Both record the thoughts of a middle-aged woman as she sits in bed next to her sleeping husband. I realized Swift was rewriting Joyce’s early twentieth-century masterpiece for the contemporary age. He had done a similar experiment in his Booker Prize-winning novel, ‘Waterland,’ where he rewrote Faulkner’s ‘Absalom, Absalom!’” Kaczvinsky said none of the past reviews of Swift’s novel recognized the connection so he felt it important to point out how Swift was using Ulysses to structure and craft his own novel. “This also led to a consideration of aesthetic questions, like the notion of ‘originality,’ literary influence, and the creative process,” Kaczvinsky said. Kaczvinsky teaches a course in Modern British Literature and another in Contemporary British Literature, and intends to incorporate his University of Łódź presentation and observations into both courses. “The presentation is also part of a chapter in my next book, titled ‘Storied Lives,’ where I hope to demonstrate how Graham Swift rewrites the major Modernist writers like Joyce, Woolf, Eliot, and Faulkner,” said Kaczvinsky. The Reading Graham Swift: International Conference featured speakers from the United States, Poland, the U.K., Greece, France, Taiwan, and Saudi Arabia. It is only the second conference dedicated to the works of Graham Swift, an award-winning contemporary British writer of novels such as “Waterland,” “Last Orders,” and “The Light of Day.”