Two graduate students and four undergraduate English majors at Louisiana Tech University represented the Tech Rho Gamma Chapter of Sigma Tau Delta and presented their scholarship for the Sigma Tau Delta International Conference in Minneapolis, Minnesota. Their papers were selected from many submissions from chapters of the English honorary society from across the country. 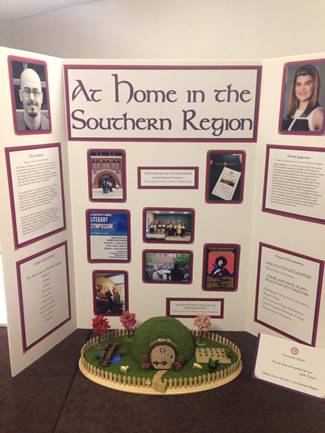 The display board for the Southern Region, prepared by Louisiana Tech student Amber Jurgensen, showed chapter activities and projects.

Graduate students and their presentations were Alana Crump, “Women Writers in A Room of One’s Own” and Rachel Burroughs, “Point of No Return.” Undergraduates presenting were Hannah Gissendanner, “Sexual Perversion and the Home in McTeague;” Amber Jurgensen, “Nobility and Identity in She Stoops to Conquer;” Dawson Shannon, “Courtly Love and Marriage;” and Taylor Parker, “Do as Men Do: Women at ‘Home’ in Shakespeare.” Parker’s paper on Shakespeare won second place in “The Bard Award,” an award category for Shakespeare papers created this year to commemorate the 400th anniversary of Shakespeare’s death. She will also present her paper during the 10th Annual Shakespeare Festival hosted by the Rho Gamma Chapter of Sigma Tau Delta on Wednesday, April 20 in the George T. Madison Hall Shakespeare Garden in the courtyard. Dr. Nicole DeFee and Dr. Scott Levin serve as co-advisers for the honor society. “The six students who presented at the conference this year represent some of the best of what not only our English department has to offer, but also what Louisiana Tech University as a whole has to offer,” said DeFee, who accompanied them to the conference. “These papers illustrate the hard work and dedication of these students. Their presentations were professional and their work illustrates what’s to come for the next generation of scholarship. While I know the students were proud and honored to be there, the honor was also mine to have been a part of this conference with them.” Jurgensen, who had served as the Southern Region Student Representative for the national fraternity, ended her tenure in the position.  She also received an award for creating the Louisiana Tech chapter’s display board showing chapter activities and projects.  The board competition raised funds for a library for the Ruth House, a shelter for women in crisis. Written by Judith Roberts – jroberts@latech.edu