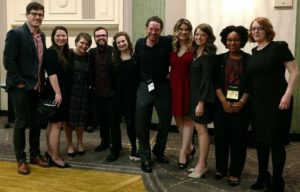 The annual convention gathers over 500 English students from all over the United States as well as international students. Each student attending has submitted scholarly or creative work to be considered for the conference. Those who are selected for the conference present their work in one of the four days of panels which are followed by question-and-answer sessions run by college professors. Two of the students took home prestigious awards: the first place in the American Literature Critical Analysis category, which included a check for $600 went to Hannah Knies, whose paper was titled “Liminality and Sexual Freedom in Nabakov’s Lolita.” The second place in the British Literature Critical Analysis category, which included a check for $400, went to Amber Jurgensen, who paper was entitled, “Language and Social Class in Oliver Twist.” This was a banner year for Louisiana Tech’s English Honors students and the Rho Gamma chapter, which celebrated its 76th anniversary. Next year’s conference will be in St. Louis, Missouri. Students interested in Sigma Tau Delta should contact faculty advisers Dr. Scott Levin (slevin@latech.edu) or Dr. Nicole de Fee (ndefee@latech.edu).