Echoes of Professor Robert C. Snyder Sr.: An Influence for the Ages 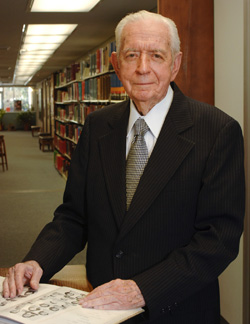 His words are the voice you keep hearing; his lessons the wisdom you lean on; his classroom the one you’ve never quite left. He’s the little book you always keep in your pocket. Robert C. Snyder Sr., “Mr. Snyder” to thousands of Louisiana Tech literature students, was a Tech professor for 42 years but an influence for the ages. A gifted teacher and passionate scholar who joined the faculty at Tech in 1947, the much-loved Professor Emeritus died Wednesday in Ruston. He was 92. His wife, Virginia Webb Snyder, passed away March 21 at age 88. One could argue that Snyder was the most loved teacher at Tech for at least four decades.  He instructed, encouraged, counseled, consoled, challenged and inspired. He did it with everything from Plato’s “Republic” to Frost’s poetry, all with a charm and passion, a shout or a whisper. He expertly navigated the classroom trail, sometimes changing tactics, but tailoring his presentations to students while stealthily making them rise to his level. But he was more than a champion in the class room. He advised governors and congressmen, spoke at every Kiwanis and Optimist club within a day’s drive of Ruston, and still found time daily to spend with his friends Thoreau and Tennyson, Pope and Emerson. He never stopped learning or teaching. His resume includes almost singlehandedly founding the Lincoln Parish Library and serving on its Board for 39 years and the State Library Board from 1968 to 2005. He received the Modisette Award for Outstanding Trustee from the Louisiana Library Association in 1971. He was a member of Louisiana’s Commission on Governmental Ethics for more than 20 years. A former chairman of Tech’s department of English and foreign languages, he received the University’s Arlis Scogin Distinguished Service Award in 2005. He was named Tech’s first Distinguished Professor in 1982. And in 1977, an endowed professorship in English at Tech was established in his honor by Charles and Sam Wyly, two of his former students. Until health problems slowed them down, both he and Mrs. Snyder were regulars at Tech football and basketball games and other events. The University was, he said often, “a part of me.” While his body of work stretched as far as the most distant Tech graduate, it was in the classroom, among the acne and ignorance, that he was perhaps most at home and at his best. He was a brow beater, a book waver, an insult slinger — and a literary fire lighter. Among his most precious gifts shared was his ability to almost trick students into doing their best, his knack for making struggling students who “had to take English” find a side of themselves that longed for and even needed the lessons of literature. He was always true to the old masters of the craft, to the mind of the past. Faithfully, he passed the lessons of those lives along. Corre Stegall was a student of Snyder’s before becoming a member of his English faculty and, today, the University’s Vice President for University Advancement. She “enrolled in every class Mr. Snyder taught, marveling each semester at his remarkable knowledge of literature, but even more at his uncanny ability to analyze people and situations in the present and relate them to history and literature, predicting with accuracy the eventual outcome,” she said. “I now recognize that as the most valuable part of my education.” Nearly 40 years ago in a speech he presented to a state convention of outstanding high school students, Snyder outlined his philosophy of life, sharing with those teens the same philosophy he shared on the Tech campus in class after class, quarter after quarter, year after year. “I am so very weary of hearing that the world is going to be blown up—that youth is not to be trusted—that there is no chance for greatness today—that most of the frontiers have been conquered,” he said. “Let me say to you that all of these suggestions are untrue and will not come to pass, for we are actually just in the infancy of civilization, and you are living in a glorious age and day. Man is just beginning to crawl, so to speak.” “Troubles and problems will give you strength,” he said. “Your only resolve should be to maintain fidelity to just principle, to what is right, to what is noble, to what ought to be.” In that speech as in his everyday life, he quoted from so many of his favorite pieces of literature that through him, many of his students came to love, too. “Our Town.” “The Gift of the Magi.” “Walden.” “Leaves of Grass.” And he told his lucky students, as did Thoreau, that the same questions that disturb and puzzle and confound us have in their turn occurred to all wise men; not one has been omitted, and each has answered them, according to his ability, by his words and his living. We at Louisiana Tech are lucky, those of us who read the book that Mr. Snyder lived.