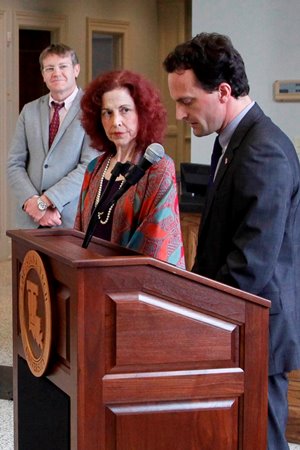 The chevalier (knight) award is given for outstanding work in promoting the French language and culture and for contributions of exceptional value to the profession as a French language educator. The Cooperation Attaché for Cultural, Academic, and University Mission, Raymond Hinz accompanied the Consul General. According to their website, the French Academic Palms (L’Ordre des Palmes académiques) is an award given by the Ministry of French National Education for “those who have rendered eminent service to French education and have contributed actively to the prestige of French culture … this esteemed distinction acknowledges their merits, talents, and exemplary activities.” Napoléon I established the Palmes Académiques as a title as early as 1808 to acknowledge the outstanding achievements of members of the University. Napoléon III made the Palmes Académiques a formal decoration in 1866. The Palmes Académiques remains the oldest non-military decoration in France. After welcoming remarks by the director of the School of Literature and Language, Dr. Susan Roach and the dean of the College of Liberal Arts, Dr. Don Kaczvinksy, Trumel decorated Hurtig with the Palmes Académiques insignia, a silver laurel wreath medallion with a purple ribbon, the official color of the Palmes Académiques. Hurtig, in an address to the audience, expressed her thanks and acknowledged the organizations and the leaders she cooperates with at the state, national, and local levels. Now in her 29th year at Louisiana Tech, Hurtig has recently edited and contributed to the book “Allons au cinéma: Promoting French through films.” The book, published by the American Association of Teachers of French housed on the campus of the University of Southern Illinois at Carbondale, is suitable for a university course on Francophone film. She also serves as dual enrollment coordinator for French at Tech and for 19 years has been adviser for the National French Honor Society, Pi Delta Phi. She represents Louisiana Tech on CODOFIL and assists students with scholarship and assistantship applications. Nationally, she co-chairs the National Commission on Cinema of the American Association of Teachers of French, and is producing a second volume on cinema to be published January 2016. Locally, Hurtig is a member of the American Association of University Women, educators and retired educators of the Grambling and Ruston communities. Written by Judith Roberts – jroberts@latech.edu