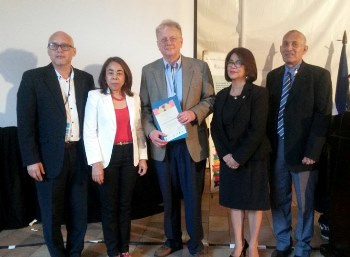 In presenting the certificate of recognition on the behalf of congress authorities, Professor Rolando Sierra Fonseca, director of the Honduras branch of the Latin American College of Social Sciences, and Dr. Mélida Velásquez Lambur, director of history majors, recognized Webre’s long record of contributions to the field of Central American history and his many activities over the years in support of the biennial academic meeting. The Central American Historical Congress is the single most recognized gathering for area specialists.  This year’s event drew some 400 researchers, teachers and students from 13 different countries to participate in a program featuring more than 200 original papers, plus featured lecturers, workshops, round tables and book launches. Active in the organization since its founding in 1992, Webre has served as coordinator of the program section devoted to the history of the Spanish colonial period.  At this year’s meeting, he presented a research paper titled “The Misfortunes of Doña Bárbara del Castillo,” in which he reconstructed the life of a widow in seventeenth-century Guatemala, demonstrating how she found ways to survive, despite repeated tragedies and acts of betrayal. Webre received his doctorate at Tulane University and been a member of the Louisiana Tech faculty for the past 34 years.  He is a specialist in Latin American history with a special interest in Central America.  Webre’s publications include three books and multiple articles in academic journals.