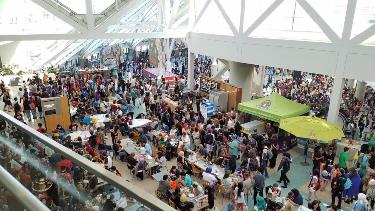 McKevitt, an expert on the history of Japanese pop culture in the United States, was the featured speaker at the Anime and Manga Studies Symposium, which brings scholars to the convention to share research with fans.  McKevitt’s address was based on his forthcoming book, Consuming Japan: Popular Culture and the Globalizing of 1980s America, which will be released in October by the University of North Carolina Press. According to McKevitt, Americans have been enjoying anime and manga in various forms since the 1960s, but only in the 1990s has Japanese pop culture reach widespread popularity. “My goal at Anime Expo was to help fans understand the historical context in which their favorite films and shows arrived in the United States,” he said. “Anime fandom in this country was born at a moment of real conflict with Japan, and in their celebration of a global cultural product, anime fans pointed the way toward a globalized future rather than one driven by nationalism.” The first Anime Expo was held in 1992 with the Anime and Manga Symposium programming beginning in 2012. “Los Angeles was an auspicious place to talk about anime fandom in 2017 because the very first U.S. fan club dedicated to anime was founded there 40 years ago by local science-fiction fans,” McKevitt said.  “Events like this show the many thoughtful and creative ways anime fans engage with their favorite films, series, and characters.” Consuming Japan: Popular Culture and the Globalizing of 1980s America is available now for preorder on Amazon and the UNC Press website.